Make your sesh super fun and cute with this custom bong by Canna Style. This 10 inch glass beaker bong is adorned with so many cute prints. Smiley face, yin yang, heart & rainbow daisy patterns will accompany you with each puff.

Ships with everything you need to start smoking, downstem and 14mm Male Bowl/Slide included.

The prints are not stickers, they are baked into the glass and will not fade or peel. You can clean this bong like any glass piece, such as Isopropyl and salt.

Intended for tobacco use

Got a few items from here. I loved my entire order! 🤌🏽💕

I'm obsessed with this! It's so cute and I didn't realize it glows in the dark so that was a nice surprise. Highly recommend.

M
Mari Cortez
Love this cute bong! But Some things could be improved

Pros:
Absolutely love the design of this bong and the glass is really durable! It also hit really nice. I was a bit concerned about the size of the hole in the bowl piece and thought that the weed might go down the stem piece and into the water but it didn’t! I was relieved that everything stayed put where it should. This bong is also relatively easy to clean!
This bong arrived quickly and a couple days earlier than the expected delivery date!

Cons:
While the design is absolutely beautiful, I’ve only had this bong for maybe 2 weeks and only used it once during that time, it is already somewhat chipping from the glass. I think that this design will chip a lot more later too.
I didn’t like how the bong was packaged because it was only wrapped with a thin layer of bubble wrap. When I picked up the box all of pieces were shaking around inside and I was worried it had broke but thankfully nothing did. I would recommend for the seller to add more padding in the box so that the pieces are not rattling around inside the box during delivery.

TLDR: I gave 4 stars because this bong hit well and is cute but took off a star because my bong arrived with the design chipping off. 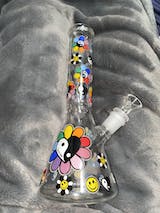